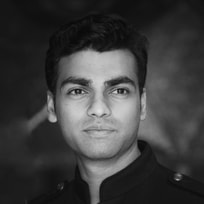 ​Abhijeet Shrivastava was born in 1989 in Jabalpur, central India. From an early age Abhijeet demonstrated an innate passion for expressing his thoughts and observations through textures of charcoal on paper.
Charcoal is one of the most ancient, natural and environmentally friendly art material, and using charcoal is his attempt to preserve this original form of historic art. “ Everything around us is made of coal. I like to use coal as a soul material to capture the visual stories” he has said.
Abhijeet is a self-taught artist and his work has been described as a delicate equilibrium between life as a performance and visual calm.

Abhijeet migrated to the United States in 2013 to pursue his master’s degree from Columbia University, New York. His artwork has been exhibited in multiple galleries in India and the United States. Although Abhijeet is proficient in using computed design tools, he still enjoys hand drawings.